SWISH renders terms using term//2 from library(http/term_html). This mimics write_term/2, emitting the term with the same text as write_term/2 with a lot of HTML <span> elements that allow for highlighting as well as attaching JavaScript for some interaction (currently only allows collapsing compounds and lists in SWISH).

I’m looking for a more advanced version of this. Think a bit about the JSON and JavaScript object rendering in the development environment of browsers. For one, I’d like to be able to render compounds vertically (with each argument on a line) and I want more interaction (changing display mode for elements, folding/unfolding, etc.)

I wonder whether that has been done and, if not, whether people are interested in some brainstorming and collaboration to make this happen.

Some feedback so that you understand what others (at least me) are thinking.

The first problem with this IMHO is not the existing way(s) or even new ways, it is getting others to use and understand what can currently be done. Obviously you know this but to list my current knowledge for reference as there are still many parts of SWI-Prolog I don’t know or have no experience.

Granted my use of SWISH is next to nothing but the sandboxing in SWISH often kills most of what I try there, so I just don’t use it much.

In working with JSON a while ago I found converting JSON into dicts (ref) for working with SWI-Prolog quite useful and for viewing JSON created by SWI-Prolog would just use tell/1,told/0 to output it to file and then use one of the many online JSON viewers (Google search) to display the JSON (usually as a copy/paste as the data was about a page or less).

Another thing I am thinking is that JSON is typically a format for transferring data and is only looked at for development or bugs. The more useful format is YAML as JSON doesn’t have comments and YAML comes in handy when wanting JSON as a configuration file with human readable comments.

For me I can solve my problems with what I currently know.

The only thing I can think of that would help you is the (Google search) of JSON viewers for ideas.

My scope is far more limited. When, in SWISH, you write a term, e.g. ?- write(hello(world))., you’ll see it does a bit of highlighting (using colors and fonts) to make the term more readable. You can hover over the hello and click it to collapse the term into … (and click the … to re-expand the term).

I’m only referring to JSON viewers because I want that kind of functionality. While dicts are similar to JSON, we have quite a bit more Prolog terms (variables, compounds, compounds defined as operators, etc.). The challenge is to make it easy to understand complex terms using layout as well as interaction to switch (sub) terms to different layouts (collapse, vertical, horizontal, etc.)

If you want it anyway, run it locally. Then you can disable the sandbox or even run it in IDE mode where it runs on top of your Prolog process such that you can also use the toplevel.

Running of the examples noted in Jan W. post.

in SWISH, you write a term, e.g. ?- write(hello(world)). , you’ll see it does a bit of highlighting (using colors and fonts) to make the term more readable.

The challenge is to make it easy to understand complex terms using layout as well as interaction to switch (sub) terms to different layouts (collapse, vertical, horizontal, etc.)

OCaml has a format module which has hbox and vbox and I have used but really don’t like. I mention it because a Google search for hbox and vbox bring up similar things in other languages and might lead to something better. At the very least it is an idea that is in more than a few programming languages.

I am curious to hear from @jamesnvc on the original post and if CSS can help.

I am just gonna through this out there without trying to sell it too hard. Have you considered SVG instead of traditional HTML tags for rendering? The only thing that SVG sucks at is actual text rendering

but as long as the texts stay short this isn’t a pressing issue.

For one, I’d like to be able to render compounds vertically (with each argument on a line) and I want more interaction (changing display mode for elements, folding/unfolding, etc.)

I think it’s a great idea.
that’s how compound terms are rendered in a DAP debugger session, see:

I take it that when designing that part you had inspiration from something and possibly looked at existing code. Care to share that line of thinking.

I also like the use of the single changing arrow character before the group; (⏵ ⏷) I have been using such for years.
Just the other day I saw it done differently with two different buttons on the screen at the same time (not changing on click), drove me nuts.

when designing that part

Unfortunately, I can’t claim any credit for the UI, it is implemented it this Emacs package DAP Mode. I’ve only implemented the server that adapts the SWI-Prolog debugger to benefit from this interface

Another nice feature to think about is the copy as icon/button, E.g. as text, as html, …

Discourse has a text only version of this

In the text above if you mouse over the upper right it will show a copy button.

For wider text Discourse has an expand button.

The folding bits can be done with vanilla HTML, using the <details> element.

Certainly we could apply CSS to make it look like pretty much whatever we want, but I guess the question is where that CSS comes from – if term//2 from term_html is just outputting the plain HTML, would there be a separate DCG to emit the corresponding CSS, to be put in the head of the embedding page? On one hand, having the CSS separate would make it easier to make it look different in different contexts, not to mention making it easier to emit responsive styles. On the other hand though, that’s another, possible annoying step to do, and it makes term//2 less “stand-alone”. Adding the styles inline in the generated HTML is a possible solution to that, but that would both make it more annoying to override and wouldn’t allow things like styling pseudo-selectors and states (e.g. on hover, making the detail disclosure element look different).

The suggestion to use SVG is also promising; I’ve had success with dynamically generated SVGs in the past; it could even be a hybrid – one can use CSS with SVGs too.

I didn’t even get past the first line before I really liked your reply. I did not know about <details> .

Thank you very much.

Thanks for the hint about <details>. That could make things a bit easier. I’m making some progress, mostly by adding more tags to the emitted HTML. The nice thing is that without any styling it is just a Prolog term as write_term/2 would produce. I think I’d like to keep that.

The pure folding tree mode is also attractive and I’m now balancing between the two, allowing the user to display any node as “vertical”, “horizontal” or “ellipsis”. There is an “auto” mode that selects a mode based on the sizes. I think it needs more input and tweaks, but it does make progress

I think the CSS must be separate, right now this is part of SWISH. Eventually it should be bundled with Pengines, still allowing the user the chose dedicated CSS. More will follow …

Details is an amazingly flexible element, very useful for all sorts of things. Some extra fun details-hacks I’ve employed:

You can style the little triangle with the ::marker pseudo-element; for example, to make it be a little “menu” icon (actually an i-chang trigram, but it looks close enough) instead of the triangle, you could do

Another fun trick, to make the “summary” show different text when it’s open vs closed:

This shows the current output after auto layout. A hook tells the system that dataset/2 terms must be in ellipsis mode (unlike the terminal term depth limit, you can click them to see the details). In does two things:

However, the conjunctions requires parenthesis. As is, these are far too small. Is there a reasonable way to make these fit the height of the expression? All I can see is to put them in their own <span> with some class and have JavaScript setting the appropriate font scaling

Note this whole thing is interactive

Scaling the fonts with javascripts seems like it would be somewhat annoying…it might be worth using SVGs for this? A little goofy-looking, but: 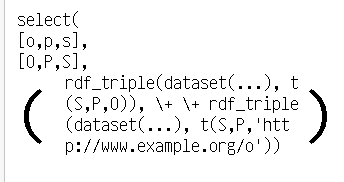 I don’t think you will use this but I will note it.

When I look at text I think of it as a thought converted it into a linear form for conveyance of an idea with the text made up of glyphs. Those glyphs can be characters of an alphabet, emojis, symbols etc. or a mix of them. Understanding The Rebus Principle helps to explain how we arrived at present day writing.

Hyperlinks makes it possible to jump from a linear form to a graphical representation that is not limited to being linear or even being static, the representation can be interactive and/or multidimensional.

So instead of trying to expand and collapse data to/from a linear form, instead a link to a different representation might be better. This is one of the reasons I like using Cytoscape.js among many other means of representation.

When clicking on such links, as we know, it is better to keep the origin of the link on the screen at the same time as the destination and thus the need for more than one panel. One of my favorite demonstrations of this is the Reactome browser.

I’ve made a first version available on SWISH -- SWI-Prolog for SHaring. Some notes:

Note that the output of write/1 and friends are also subject to this behavior, but the initial layout is always simple horizontal (wrapped) text. All styling is done using <span> elements.

If the new behavior does not show up, try a shift-reload (should be automatic some day).

Feedback and improvements are welcome. The term → HTML rendering is in packages/pengines/http/term_html.pl of the main source. The SWISH interaction is in web/js/term.js and web/css/term.css in the SWISH repository. Eventually this should probably move to the Pengine source as well.

Here are some screen shots and links to the modified code as noted in the topic by Jan W.

Hovering over the term is sensitive for functors

The term → HTML rendering is in packages/pengines/http/term_html.pl

The SWISH interaction is in web/js/term.js

When converting the format via the ellipsis (…) and then doing a copy and paste, the copied version shows an ellipsis (…). 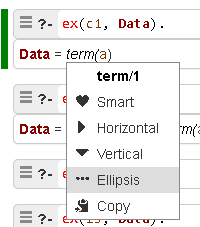 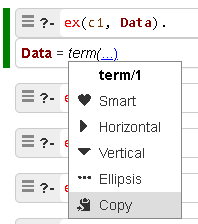 On Windows using Ctrl-v to paste in notepad, this is the result.

Should the ... in the output be expected or not?