There are always rumors that the ISO core standard syntax
is ambiguous. But its rather the other way around. The ISO
core standard explicitly says its not ambigious: 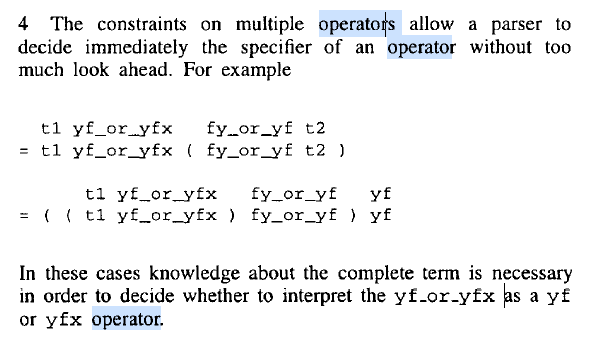 But the given example is misunderstood as requirement
of a parse that nevertheless needs a lot of lookahead. Why
is this example misunderstood?

Well its an impossible example, so therefore I think its
a negative example and not a positive example. There are no
yf_or_yfx operators in ISO core standard Prolog. Since among the

constraints for multiple operators is the following constraint:

If I use same priority, its not parsable:

If I use lower priority, it gives a different resulting term:

Edit 06.04.2022:
I tried a few other Prolog systems, like Tau Prolog and
Scryer Prolog, they all implement the constraint:

Or maybe the check is more difficult to perform
in a module context? Similar problem like here:

Only with infix and postfix for operators, instead of
static and built_in for predicates.

On the other hand I remember SWI-Prolog being
quite strict about ambiguous import of predicates.

Edit 09.04.2022:
Now I found a test case where SWI-Prolog and
Scryer Prolog differ in parsing:

Was worried what Dogelog Player does. But it seems Dogelog Player
sides with Scryer Prolog, also GNU Prolog, Tau Prolog and
formerly Jekejeke Prolog do.